Reliability
0
Out of 0 Ratings

When it comes to products, Reliability rates high in importance. Your Cordless Saw’s ability to perform and maintain its functions during everyday use, as well as extreme use or under unexpected circumstances, is important when making purchase or repair decisions.

Durability
0
Out of 0 Ratings

How will your Cordless Saw hold up over time and withstand the wear and tear of constant or long-term use? A product with strong Durability is a product that was made to last and provide a good ownership experience over it’s lifetime.

Maintenance 0
Out of 0 Ratings

Most Cordless Saw owners intend to keep their Cordless Saw in good working condition. Knowing up front if the Maintenance or repair of a product is easy or difficult can have a profound impact on your decision to make a purchase.

Performance 0
Out of 0 Ratings

Cordless Saw's that are purchased and meet or exceed expectations usually share the trait of good Performance. Feeling that a product was worth the purchase because it does everything you expected, and does it well, is a clear indicator of a product that truly performs.

Ease of Use 0
Out of 0 Ratings

How hard is this Cordless Saw to operate? If purchased, would tons of time be lost trying to figure out how it works? Simply put, Ease of Use is a measure of how easy a product is to use. Having this knowledge prior to purchase can help avoid buyer’s remorse. 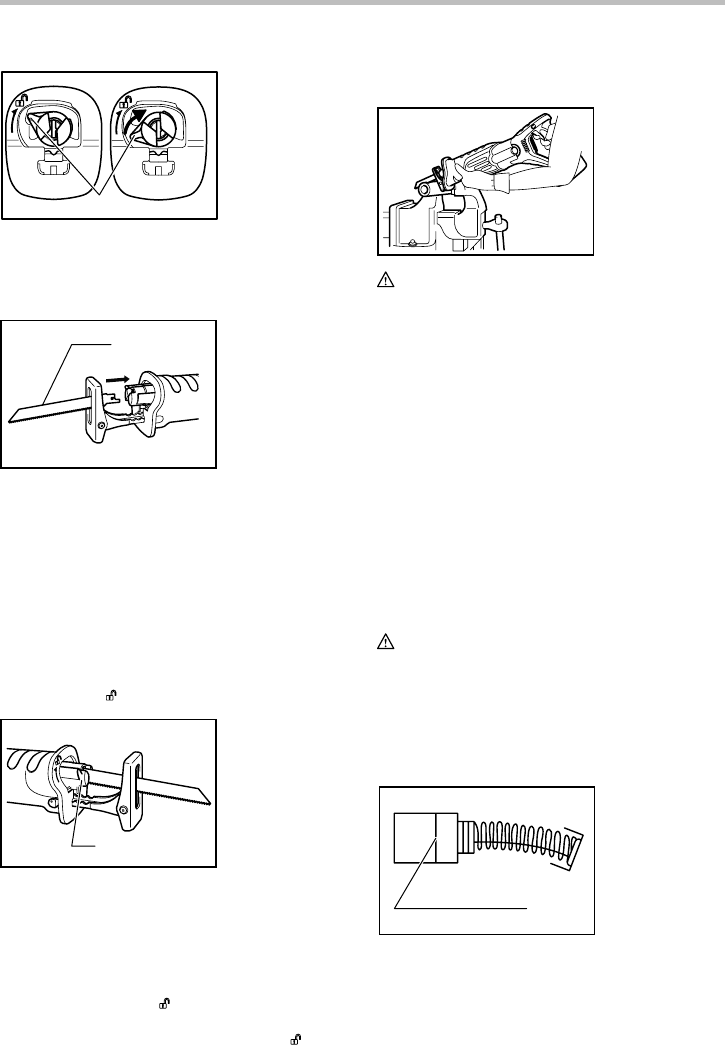 7
2
1
3
005787
Insert the saw blade into the blade clamp as far as it will
go. The blade clamp lever rotates and the saw blade is
fixed. Make sure that the saw blade cannot be extracted
even though you try to pull it out.
1
005788
NOTE:
• If you do not insert the saw blade deep enough, the
saw blade may be ejected unexpectedly during
operation. This can be extremely dangerous.
If the lever is positioned inside the tool, switch on the
tool just a second to let the blade out as shown in the
figure.
Remove the battery cartridge from the tool.
To remove the saw blade, rotate the blade clamp lever in
the direction of the arrow fully. The saw blade is
removed and the blade clamp lever is fixed at the
released position
.
1
006665
NOTE:
• Keep hands and fingers away from the lever during
the switching operation. Failure to do so may
cause personal injuries.
•
If you remove the saw blade without rotating the
blade clamp lever fully, the lever may not be locked in
the released position
. In this case, rotate the blade
clamp lever fully again, then make sure that the blade
clamp lever locked at the released position
.
OPERATION
006903
CAUTION:
• Always press the shoe firmly against the workpiece
during operation. If the shoe is removed or held
away from the workpiece during operation, strong
vibration and/or twisting will be produced, causing
the blade to snap dangerously.
• Always wear gloves to protect your hands from hot
flying chips when cutting metal.
• Be sure to always wear suitable eye protection
which conforms with current national standards.
• Always use a suitable coolant (cutting oil) when
cutting metal. Failure to do so will cause premature
blade wear.
Press the shoe firmly against the workpiece. Do not allow
the tool to bounce. Bring the blade into light contact with
the workpiece. First, make a pilot groove using a slower
speed. Then use a faster speed to continue cutting.
MAINTENANCE
CAUTION:
• Always be sure that the tool is switched off and the
battery cartridge is removed before attempting to
perform inspection or maintenance.
•
Never use gasoline, benzine, thinner, alcohol or the
like. Discoloration, deformation or cracks may result.
Replacing carbon brushes
1
001145
Remove and check the carbon brushes regularly.
Replace when they wear down to the limit mark. Keep
the carbon brushes clean and free to slip in the holders.
Both carbon brushes should be replaced at the same
time. Use only identical carbon brushes.
1. Limit mark
1. Blade clamp
lever
1. Blade
1. Blade clamp
sleeve
2. Released
position
3. Fixed position

Do It Best Product Support Center

Email This Do It Best Support Page to a Friend

To add a product select a category below or simply search by model number.

Looking for the manual for a product you purchased at Do It Best or researching before buying? You came to the right place.

Search for your Do It Best product by entering the model number in the search bar above, or use the categories below to find your item.

Tired of losing your support information? Just add the manual for your Do It Best product to your collection, and access it anytime.

Find Your Products By Category