Reliability
0
Out of 0 Ratings

When it comes to products, Reliability rates high in importance. Your Impact Driver’s ability to perform and maintain its functions during everyday use, as well as extreme use or under unexpected circumstances, is important when making purchase or repair decisions.

Durability
0
Out of 0 Ratings

How will your Impact Driver hold up over time and withstand the wear and tear of constant or long-term use? A product with strong Durability is a product that was made to last and provide a good ownership experience over it’s lifetime.

Maintenance 0
Out of 0 Ratings

Most Impact Driver owners intend to keep their Impact Driver in good working condition. Knowing up front if the Maintenance or repair of a product is easy or difficult can have a profound impact on your decision to make a purchase.

Performance 0
Out of 0 Ratings

Impact Driver's that are purchased and meet or exceed expectations usually share the trait of good Performance. Feeling that a product was worth the purchase because it does everything you expected, and does it well, is a clear indicator of a product that truly performs.

Ease of Use 0
Out of 0 Ratings

How hard is this Impact Driver to operate? If purchased, would tons of time be lost trying to figure out how it works? Simply put, Ease of Use is a measure of how easy a product is to use. Having this knowledge prior to purchase can help avoid buyer’s remorse. 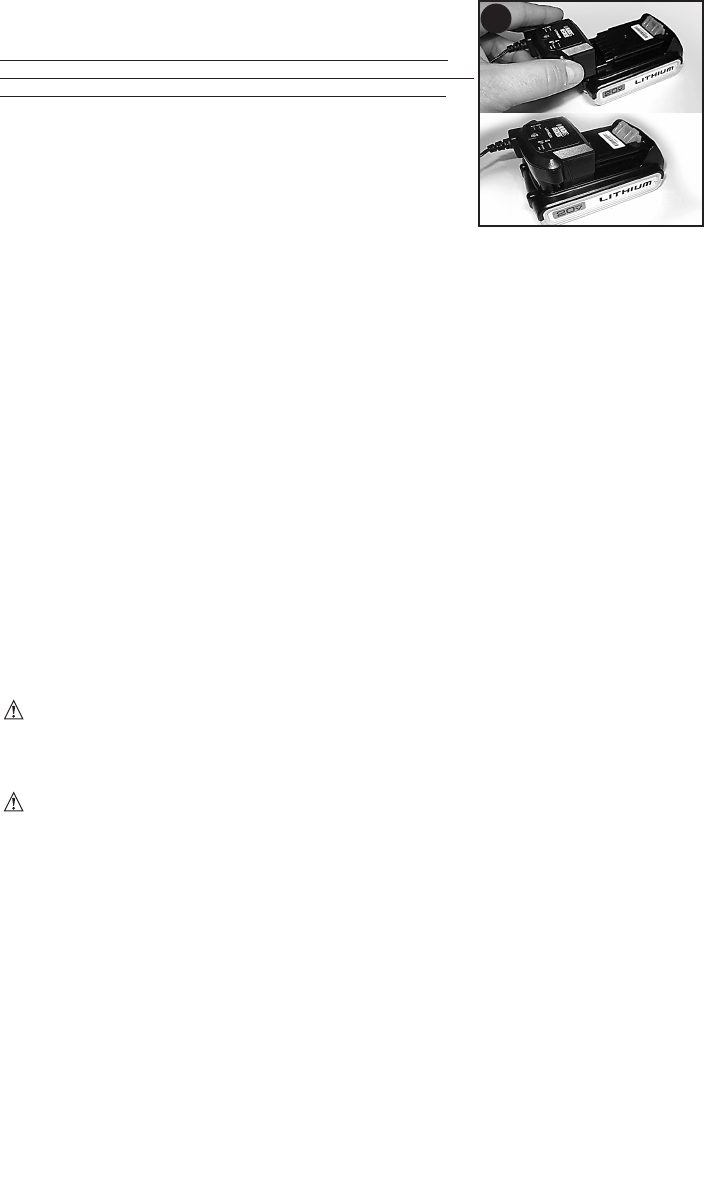 The pack is fully charged and may be used at this time or
left on the charger.
Recharge discharged batteries as soon as possible
after use or battery life may be greatly diminished. For
longest battery life, do not discharge batteries fully. It
is recommended that the batteries be recharged after
each use.
LEAVING THE BATTERY IN THE CHARGER
The charger and battery pack can be left connected with
the green LED glowing indefinitely. The charger will keep
the battery pack fresh and fully charged.
IMPORTANT CHARGING NOTES
1. Longest life and best performance can be obtained if the battery pack is charged
when the air temperature is between 65°F and 75°F (18°- 24°C). DO NOT charge the
battery pack in an air temperature below +40°F (+4.5°C), or above +105°F (+40.5°C).
This is important and will prevent serious damage to the battery pack.
2. The charger and battery pack may become warm to touch while charging. This is
a normal condition, and does not indicate a problem. To facilitate the cooling of the
battery pack after use, avoid placing the charger or battery pack in a warm environment
such as in a metal shed, or an uninsulated trailer.
3. If the battery pack does not charge properly:
a. Check current at receptacle by plugging in a lamp or other appliance
b. Check to see if receptacle is connected to a light switch which turns power off
when you turn out the lights.
c. Move charger and battery pack to a location where the surrounding air
temperature is approximately 65°F - 75°F (18°- 24°C).
d. If charging problems persist, take the tool, battery pack and charger to your
local service center.
4. The battery pack should be recharged when it fails to produce sufficient power on
jobs which were easily done previously. DO NOT CONTINUE to use under these
conditions. Follow the charging procedure. You may also charge a partially used pack
whenever you desire with no adverse affect on the battery pack.
5. Foreign materials of a conductive nature such as, but not limited to, steel wool,
aluminum foil, or any buildup of metallic particles should be kept away from charger
cavities. Always unplug the charger from the power supply when there is no battery
pack in the cavity. Unplug charger before attempting to clean.
6. Do not freeze or immerse charger in water or any other liquid.
WARNING: Shock hazard. Do not allow any liquid to get inside charger.
Never attempt to open the battery pack for any reason. If the plastic housing of the battery
pack breaks or cracks, return to a service center for recycling.
INSTALLING AND REMOVING THE BATTERY PACK FROM THE TOOL
WARNING: Make certain the lock-off button is engaged to prevent switch actuation
before removing or installing battery.
7
B

Do It Best Product Support Center

Email This Do It Best Support Page to a Friend

To add a product select a category below or simply search by model number.

Looking for the manual for a product you purchased at Do It Best or researching before buying? You came to the right place.

Search for your Do It Best product by entering the model number in the search bar above, or use the categories below to find your item.

Tired of losing your support information? Just add the manual for your Do It Best product to your collection, and access it anytime.

Find Your Products By Category